When I was a kid, I didn’t know many homeschoolers. The ones I did know were the stereotypical homeschoolers. You know the ones: denim jumpers, thought “frick” was a swear word, and could recite the entire Declaration of Independence at age four.

I won’t lie; I totally thought they were weird. I never thought I’d eventually become one of those weirdos.

My husband and I started toying with the idea of me homeschooling our children when our oldest was attending kindergarten at our church’s Mother’s Day Out program. Then, the pandemic started. COVID was pretty much the writing on the walls, telling us that we were doing the right thing. We knew then, for a fact, that we would homeschool our children.

(There are a plethora of other reasons we chose to homeschool, but I really don’t have the time to respond to infamous internet trolls that will undoubtedly comment. So, I’m going to leave that part out, mmkay?)

When we told people that we were going to homeschool, I typically received the same question over and over: “But what about socialization?”

*insert gif of Tony Stark and his sassy eye-roll here*

Do you even know what socialization means? The literal definition is: “the activity of mixing socially with others” or, “the process of learning to behave in a way that is acceptable to society.” (Let me tell you, I know A LOT of folks who have not achieved either.)

I often feel as though most people think that homeschoolers are shut-ins who only go out into society when we need groceries, and then walk around the produce section saying things like, “Praise be, there are apples. We are most blessed.”

Yeah. Not so much.

Most homeschoolers are involved in so many extracurriculars that they may have too many activities to choose from! There’s co-ops, storytimes at the library, dance classes, karate, Lego League, Awanas, scouting, zoo school, church groups–I could go on and on!

Even if a homeschooler isn’t involved in extracurriculars, socialization is still being had within their own family unit. Through play with their parents and siblings, kids learn what’s acceptable and what’s not. Parents teach and model appropriate behaviors through the simplest tasks, like going to the bank and talking to a teller, or passing someone in the aisle at the grocery store.

So the next time you see a homeschool mom with her gaggle of kids at Target and feel the urge to ask how they socialize, hold it in. After all, that’s the socially acceptable thing to do. 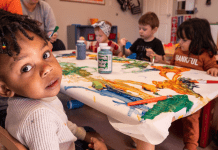 Early Foundations Gives Your Child the Foundation to Thrive! 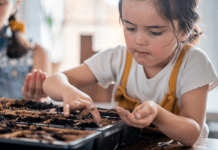 A Winter Experiment for Little Ones: Starting Seeds Indoors

Why I Chose Homeschooling