My 5-year-old little boy has the ever dreaded summer birthday.  He’s sandwiched smack dab in between the ages of “send on to kindergarten” and “do not pass go for another year”.

Being the over worrier that I am, I read article after article about this new fangled thing called “kindergarten readiness”.  I checked the lists and, honestly, my son had mastered less than half of the recommended skill sets.

He knew seven letters. On a good day.

He was too shy to be able to tell an applicable story at circle time.

I was very apprehensive – read here TERRIFIED – to send my fresh faced little 5-year-old to kindergarten.  I just knew that he needed another round of  Pre-K.   I was reluctant to send him on through to the next grade when there were so many areas that he needed to mature and grow in.

So we sent him.

I would be lying if I said the first week of kindergarten wasn’t rocky.  He was not having it, and he was mad.  However, he quickly adjusted.  He started to adore his amazingly kind and patient teacher.  As the weeks passed, I watched in awe as he quickly gained confidence in himself.

The Pre-K skills that he had yet to ace were quickly conquered.  He mastered his ABC’s and numbers.  Three months into his kindergarten year he could READ.  He then went on to be able to write sentences and comprehend simple addition.

Despite the fact that my son had very few skills mastered on those checklists that I had read plastered all over the internet, my young little 5-year-old excelled in kindergarten.

I know all children are different.  Just because my child didn’t seem ready and did fine in kindergarten does not mean all children will. I’m not suggesting that all children who aren’t prepared should be pushed on through. However, I believe without a shadow of a doubt that in my son’s particular case sending him to the next grade was the best thing I could have done.

I am so grateful that I listened to my son’s Pre-K teacher from the year before who said that he would do fine.  I fully believe that if I had gone off of some online kindergarten skill checklist and gave into my fears, I would have held my child back from blossoming.  If I had made him wait another year before jumping into kindergarten, I would have stifled his growth and he wouldn’t have been challenged to reach his full potential.

My fellow mommas, I know kindergarten readiness is such a hot topic.  I know there is so much conflicting information on the subject, and the choice can seem daunting and life altering.  However, as we all start thinking about enrolling our kids for the next year, have confidence in the fact that your child will excel no matter what decision you end up making. 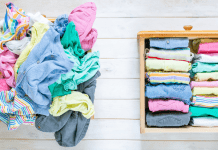 7 Tips to Sorting & Storing Hand Me Down Clothes 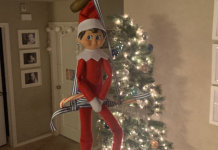 30 Simple Elf on the Shelf Ideas